I have long wanted to go to Frank Lloyd Wright’s home and studio in Oak Park (just outside Chicago on the green line). I thought I had to rent a car to get there. The beauty of Google Maps (click train option) and I made plans to visit at last.

Getting there on the green line actually was a little more complicated because I was trying to get on in Bridgeport instead of downtown. I had made a 2:00 p.m. tour reservation and after a bus ride to Roosevelt station it still was not clear when the train was departing. I pulled the “quick release” and called Lyft. The driver Caroline lives in Oak Park so I not only got there in plenty of time, I learned a lot about this first suburb of Chicago (all for $23).

Frank Lloyd Wright was just starting his career as an architect and getting married when he bought a piece of land on the edge of town and built his family home. At that time his home looked out on the prairie and he was able to draw inspiration from nature for his work. I thought about the interesting things I observed in his home and found these 5 inspirations.

1.  Marry wisely if you plan to use your home as a place of experimentation.

The family home evolved over the 20 years they lived there. They raised 6 children in this home. FLW worked out many of his ideas in his own remodeling projects. Lucky for him he seems to have chosen his wife well as she let him design not just the architecture but the furnishings as well.

2. If you are going to be a prick-ly person, then you better be a genius or super talent.

Stories abound of FLW’s very particular vision and his disregard for others feelings in his pursuit of this vision. Our docent did not sugar coat why he got fired–he was designing homes behind his bosses’ backs. Moonlighting is frowned upon when you are keeping business to yourself and not sharing the fees with the partners. In college I had the honor of going to a conference at Wingspread in Racine, Wisconsin. Wingspread is a prairie home (mansion) that FLW designed for the Johnson&Johnson family. They told stories of him returning to visit and staying up all night rearranging the furniture and generally being an eccentric and demanding house guest.

3. It is fun to be creative and design special things for your own living space.

FLW designed many decorative elements of his home (such as the skylight in the photo below). He must have enjoyed it.

4. You have to be willing to stand out and risk ridicule if you are an original thinker.

Frank Lloyd Wright made a huge impact on American architecture because he was willing to take risks. 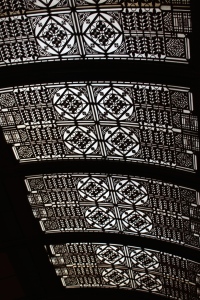 After the tour I walked about 4 blocks to main street Oak Park through a beautiful neighborhood contemporary to his home. The docent said we would be able to see several of his homes on our walk. He was absolutely correct and they were easy to spot. The homes of the period, when he was developing his unique vision, were Victorian. Stately yes, but not very interesting. 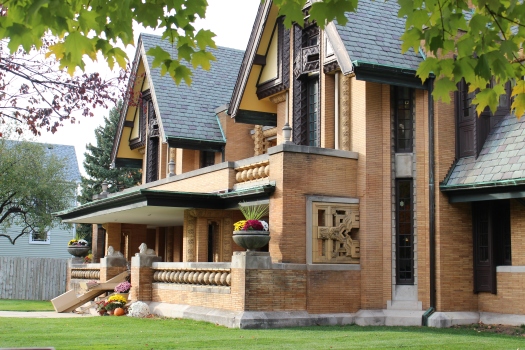 Compare this to the lines of one of his early designs. This is a clunkier version than the clean modern lines he eventually made popular, but already it is a big departure and a risky choice for both the homeowners and FLW.

5.  If you are going to think outside the box, it helps to be short.

The piano that he inset in the wall to save space in the interior of the “playroom” is suspended and hangs out over the staircase. This is fine if you are 5’9″ or shorter.