I confess that I have not read any of the Game of Throne books or watched any of the episodes of the television adaptation, but my son has and as we were traveling together, I did a fair bit of research to include it in our plan.

We arrived in Dublin at 5 in the morning and we planned a big day of driving from Dublin to Belfast via Derry, Giant’s Causeway and Bushmills. There were a number of places where Game of Thrones filming features the town or landscape, including Ballintoy 12.5 miles east of the Giant’s Causeway. Described in a guidebook as a “picture-postcard harbour”, it is featured as Iron Islands’ Lordsport Harbour. I found mentions like this throughout the guidebooks I consulted. None of these places is quick and easy to get to and on a winter’s day when the sun sets just before 5, we had to prune them from our plan. 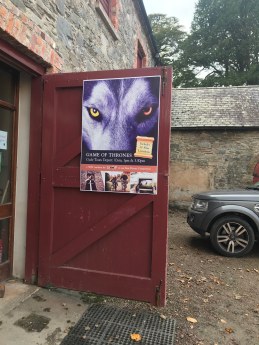 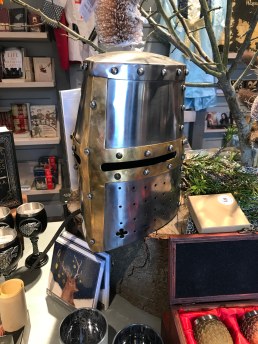 I also found a smart phone app that promised a kind of scavenger hunt for Game of Thrones sites. On closer examination it turns out that there are a series of carved doors inspired by Game of Thrones that make up the destinations on this app.  If you had lots of time and you are using Game of Thrones as your organizing principle then you may be interested. 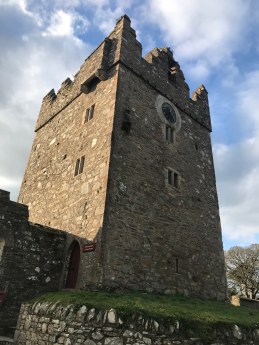 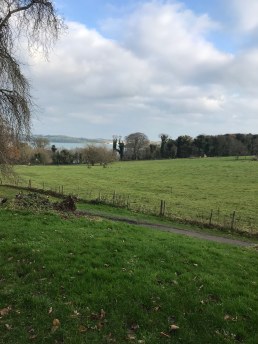 We settled on Castle Ward Estate, a National Trust property, that doubles as Winterfell in Game of Thrones. This was a great choice because it was interesting in its own right and yet Tevis got the bonus association with Game of Thrones. We were able to fit in as a small detour as we drove from Belfast to Dublin. The cafe offers a delicious selection of sandwiches if your visit coincides with lunchtime. The entrance fee is 8 pounds.

P.S. You may have heard the term “overtourism” or the idea that so many people are flocking to places made popular by social media that they are destroying what the very thing they love. Such are the Dark Hedges that double as Kingsroad on Game of Thrones.

We planned our Ireland trip around two nodes: Belfast and Dublin. We drove from the Dublin Airport to Derry, Bushmills and the Giants Causeway, ending our first day in downtown Belfast. One of main purposes was to connect in person with our friends we made when volunteering with Habitat for Humanity, Northern Ireland. This left almost a full day free to explore Belfast. I decided to check out the new-to-me Titanic Quarter.

This area of Belfast, named after the shipbuilder Harland and Wolff’s most famous ship, has been completely revitalized since my last visit. It is 185 acres within the Belfast Harbour. A Dublin based developer has built a combination of docklands, office buildings, retail, entertainment, movie studio, Titanic Museum and Titanic hotel. 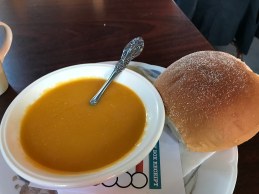 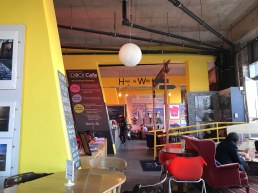 I was getting peckish by the time I reached a cafe called The Dock. I walked through the door and felt like I fell into a delightful alternate universe. The decor was bright and spacious and welcoming. A sign explained that it was a “pay what you can afford” cafe. They had limited offerings for lunch and tea breaks, but lots of friendly volunteers. First I had a cup of tea and wrote in my journal, then I went back for a bowl of soup and a bun. The other diners were a combination of young people from the nearby office blocks, backpackers and oddments like me.

An older woman asked if she could share my table. She was from Enniskillen but had just returned from Kansas City, Missouri. She joined her daughter–who converted to evangelical Christianity whilst in Oxford–for a conference. It happened to be while the hearings for Judge Kavanaugh were playing 24-7 on cable news. Apparently she was watching FOX, because she thought he was a victim of the most awful treatment by the media and Democrats. Her final indictment: “Why didn’t Dr. Blasey Ford report it at the time? I don’t believe it happened.” I listened until she was done and then I asked if I could share my perspective. I explained that I was the same age as Kavanaugh and that I’d had similar experiences to Christine Blasey Ford. I knew at the time that there was no point in reporting it because I either wouldn’t be believed or my reputation would be harmed and there wouldn’t be any repercussions to the men involved. I asked if she knew what I meant and she nodded. I added that not all young men treated women this way, in fact most did not, but I knew young men like Kavanaugh. And based on his behavior in the hearings, I didn’t see why we should advance him to the highest court–the Supreme Court. She hadn’t thought of it that way. I was glad to have the chance to offer another perspective and I was tired out by the conversation.

It was a short walk to the Titanic Museum. I will write more about this museum in a separate post.

Just beyond the museum is the movie studio where Game of Thrones is filmed. It is not open to visitors. The volunteer at the Dock that served me my tea said that sometimes the extras and others from the studio come in to dine at the Dock.

I had walked for several hours, so I grabbed a cab back to The Fitzwilliam Hotel. The vote in the British Parliament on Brexit was coming up. The local newspapers were full of the details and how it will impact Northern Ireland and the border with the Irish Republic. The cab driver explained the he didn’t vote in general elections as it was a waste of time. Half the representatives would be from the DUP (Protestant, never leave Britain party) and half would be Sinn Fein (Catholic, reunify with the Republic), and since Sinn Fein refused their seats in Parliament on principal, the cab driver felt he wasn’t represented. So he didn’t vote and I understood his frustration. 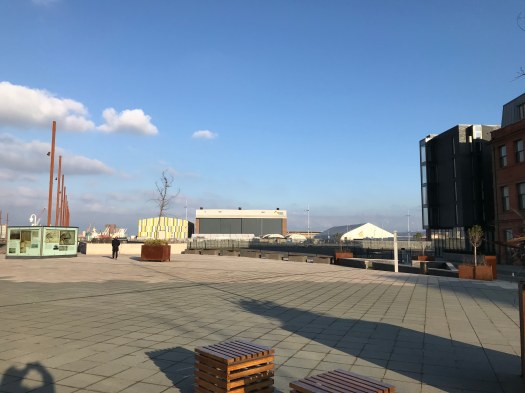 I had just enough time to refresh and catch up with Tevis’ adventures before we joined our friends for dinner.

Peter and Tracy and their two adorable young boys have a comfortable life, but not a lavish lifestyle. We asked them about what they thought might happen with Brexit. They didn’t know, but they sounded as defeated as the cab driver. They thought the DUP, in their insistence to drive a hard-line and vote against Brexit, might actually hasten the party’s worst nightmare. People in Northern Ireland had voted to remain and now a hard Brexit might drive them to choose reunification over staying with Britain. This would likely make education, health, and housing more expensive. What had been an interesting and primarily intellectual discussion between Tevis and me, suddenly became real in terms of what it might mean to the hard-won and tenuous peace and the impacts to people and their everyday lives.

My son and I visited the National Trust property Castle Ward in Northern Ireland. It is the property used to film Game of Thrones “Winterfell.”  When we entered the property the person in the guard house asked if we are members of the National Trust. We are not because we live in the USA and do not come to the United Kingdom (includes NI) very often. She gave us a brochure for the Royal Oak Foundation, urging us to consider membership and implying that there are places we could use it in the USA, yet neither of us had ever heard of it. “Royal” in the title is suspicious too! 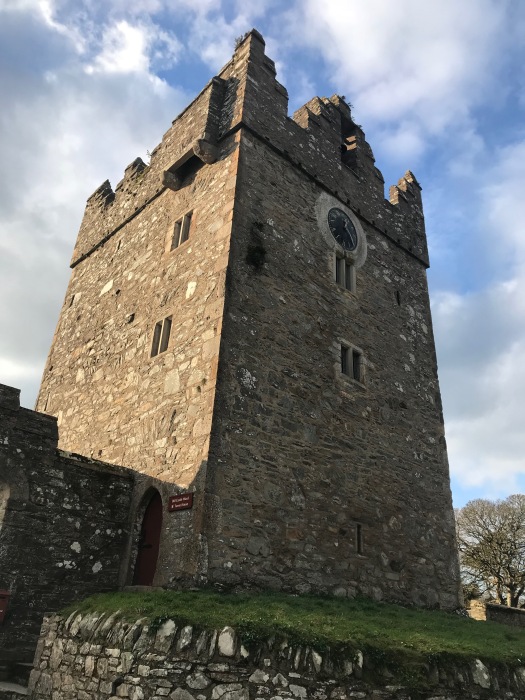 Essentially, it is a National Trust membership for Americans. It gives the same membership privileges when you are in the UK, but there are no properties in the USA that the membership will gain entrance or that has reciprocal privileges.  It still might be a good action to take if you are going to visit a lot of National Trust sites. In Northern Ireland we came across two: Giants Causeway and Castle Ward, so it only makes sense if you are a historical preservation enthusiast.

Post script: We stopped at the Tea Room at Castle Ward and shared a turkey sandwich with stuffing and cranberry. It was Friday, the day after Thanksgiving so it was lovely to partake in “leftovers.”