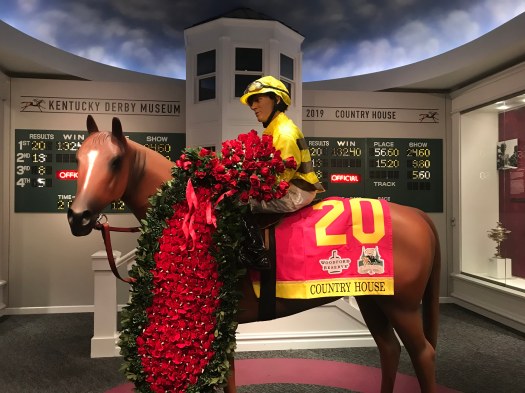 The Kentucky Derby Museum is a combination of Derby trivia, interactive displays, walking tour, and surround-a-movie. It is a terrific bargain at $15 per person. You can pay extra for longer walking tours. I was only allotting about 1.5 hours because I needed to visit Ohio! 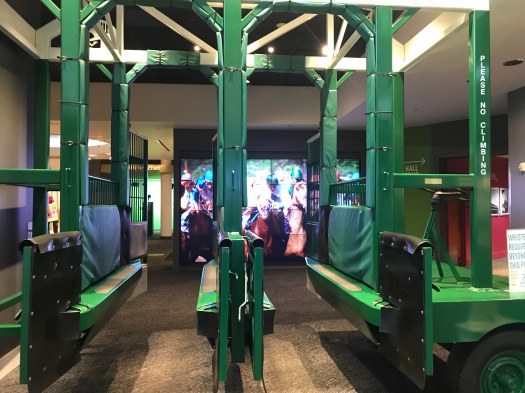 Right out of the starting gate I liked how the museum curators did their best to help you imagine what it is like to be the horse, the jockey, the trainer, the owner, the betting fan, and so on. There are lots of lists of all of the winners for the longest consecutive Derby in the United States–145 years!

This was the first year where the stewards played a role in the outcome. Several jockeys lodged a complaint of interference by Maximum Security–the first horse across the finish line. Twenty minutes later the second place horse, Country House, was declared the winner. I personally was relieved when the public generally supported the stewards. Too many people seem to think it is okay to cuss out the referee and it feels like more people are cheating in all arenas of life.

When I was 10 years old, I watched Secretariat win the Kentucky Derby and go on to win the Triple Crown. I was a horse crazy little girl. As I spent more time riding horses and watching horse events, I became a little less enthusiastic about horse racing. It has always been too cavalier about horse health. And now the concerns mount as the number of deaths at Santa Anita Racetrack mystifies the trainers and others. Watching the film at the Kentucky Derby Museum brought back to my memory all the reasons I loved horse racing as a kid. It is a truly beautiful sport. I may have to watch the movie Secretariat again.

The walk underneath the grandstands and out to the track was very interesting. The tour guide knew her stuff. And we got much closer to the places at the track than most people ever will on the first Saturday in May when 150,000 people pour into Churchill Downs.

#MiddleAmericaTour. I can now say I’ve been to KENTUCKY!