The people-only ferry from Southampton to Cowes on the Isle of Wight is just 25 minutes. Long enough for the woman next to me to fall asleep and snore softly and for me to start feeling queasy and then we arrived. You can catch a ferry from Portsmouth, Southampton, and Yarmouth.

Cowes is a quaint village. There are other villages on the island and room for a music festival, but I stayed on the few blocks that hug the coastline and had a delightful time.

I can see why Britons outside London might be feeling some discontent. In Cowes the post office was closed and the only place to ship packages was from a grocery store up the hill. There are no bank storefronts–only mobile vans–and one ATM (or “hole in the wall”), so there is always a line. And the floating bridge connecting East Cowes and Cowes was not working while I was there on the weekend of the music festival.

Still Cowes is flat out charming and worth the effort, especially if you love sailing. 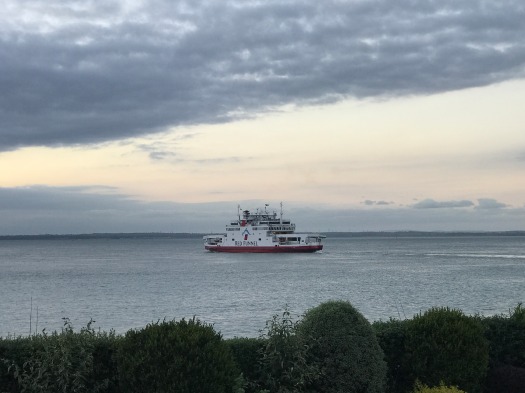 Getting to Cowes takes some effort. In my case, starting from Copenhagen involved a train, a plane, a bus, a train and a ferry. The Britain Rail website was completely misleading but fortunately the Heathrow Express agents were super helpful. Bottom line, the only train leaving Heathrow is the Heathrow Express. Everything else is connectable by bus. I rode the bus from Heathrow to Woking, then the train to Southampton. There is bus that will take you to the ferry terminal for 2 pounds or free if you have a Red Funnel Ferry ticket. The craziest part of my journey was learning my 5 pound note saved from May 2016 was no longer accepted. They changed the bills last year and the old ones are no longer accepted. This year they are changing the pound coins. Spend them now!