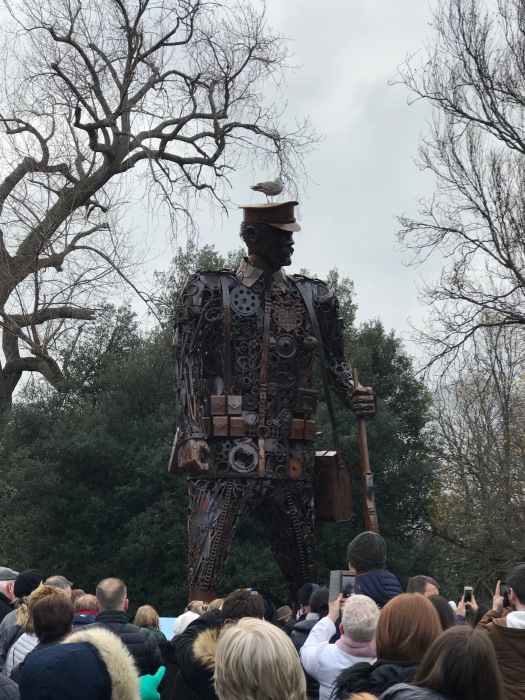 While dining on stew at O’Neill’s pub, a couple of local Dubliners made some recommendations. I was thinking aloud with my son about what I was going to do in the afternoon considering I have seen most of the popular destinations at least a couple of times. I took up both of their suggestions. 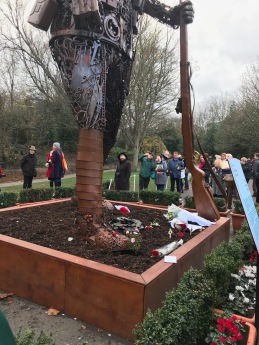 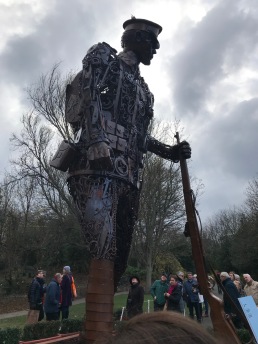 First I walked to St. Stephen’s Green to see the temporary exhibit of the World War I soldier. “The Hauntings Soldier” is the creation of Martin Galbavy with the assistance of Chris Hannam. The sculpture is made from scrap metal items like horseshoes and spanners. It is really quite moving and I was especially impressed to see how many people were on site to take it in.

Then I walked to the other side of Dublin–to Parnell Square–to see the Francis Bacon studio (recreated) at the Dublin City Gallery The Hugh Lane. The studio walls could use a fresh coat of paint. I walked all the way through the galleries (tiptoeing past a concert in the middle gallery). The exhibit with the Francis Bacon studio begins with a David Frost interview with the artist on a loop. Chaos fed his creativity. Then you walk up to a window into the recreation of his London studio and see why he is so very creative.

“The Hauntings Soldier” may not be there when you go to Dublin, but the Francis Bacon studio will be. Go!

Winding up my Tour de France adventure, I enjoyed my last 24 hours in London. I stayed at the exquisite Ampersand Hotel in South Kensington. They sent me an email a few days before my arrival asking if there was anything they could do to enhance my experience. My friend suggested seeing the stage production of War Horse. The concierge efficiently fetched tickets and after an afternoon of fossicking around bookshops in South Kensington, I duly trundled off to New London Theatre on Drury Lane to see the play.

I tried to read to the book by Michael Marpurgo and got emotionally swamped. It is told in the horse Joey’s point of view. And like Black Beauty it is gut wrenching. I may have seen about 5 minutes of the Steven Spielberg movie and could not stand the idea, again, of horses suffering even if make believe. Afterall, they did suffer cruelly in World War I, as did people. So I was a little nervous about seeing a stage production. I was also curious about how they would handle the staging and the horse characters.

Wow. I mean WOW!!!!  Just the puppetry was worth the admission price to witness. It is amazing. I have since found an awesome Ted Talk that describes how they created Joey. Please watch.

The play beautifully illustrated the complete stupidity of World War I. While it is not unique among wars (all wars are stupid), it is the first where technology completely bamboozled strategists. I can understand sending the cavalry in once against machine guns. But again and again? Stupendously stupid. It was all the more poignant for me because of my Grandma Hazel Olson’s beloved horse sold to the US Cavalry. I can only hope that he never made it to Europe–that maybe his high spirits made him too difficult to work with or too attractive to some officer who was on active duty at the Mexican border.

It is a very moving production, even more thrilling seen in a smallish theater with actors running by right in front of our seats. I realize War Horse has been on stage and travelled the world already so I am not on the cutting edge of theatre. If you have not seen it, make the effort. You will be richly rewarded.

Researching and honoring my great uncle Frank Denham on Le Tour Adventure was worthwhile and added some emotional depth to my experience. I am not going to stop learning about the war either. My favorite conversation on the topic was with my cabbie who gave me a lift from the train station to the Ampersand. With his East End accent he held forth on a number of topics. I told him about my interest in World War I and he said the machine gun was invented by an American living in London, but the British officers did not want to use it (at first) because it “wasn’t cricket.” (meaning that as gentlemen it was not the proper way to conduct warfare). I responded, “But the Germans have never played cricket.” We both shared a rueful laugh.

All of this remembering while the conflict in Ukraine results in a civilian jet liner shot down, and Gaza rages on; it is a wonder to me that mankind has not wiped itself off the earth yet. Perhaps the reason we yet remain is found in the sparks of creativity that still ignite in puppeteers and writers and many others who choose to spend their energy creating beauty and celebrating truth rather than the dark arts of war. This is the path I choose.

The 101st edition of the Tour de France is passing through many of the towns that I know better as battlefields from World War I. This is the 100th anniversary of the beginning of the War to End All Wars. (If only.) As I will be following the Tour de France from Leeds to Paris, I am taking this opportunity to learn more about my great Uncle Frank Estel Denham.

In the last few months I have learned a great deal about him.

Frank was being groomed for working the family farm alongside his dad. Been reading about Germany’s machinations to distract the US from joining the Allies by ginning up conflicts with Mexico and Japan or both together in Barbara Tuchman’s The Zimmerman Telegram (non-fiction that reads like a great spy novel). This explains why after Uncle Frank was drafted he was first sent to Mexico and then to Britain and ultimately to the front in France.

I learned from staff at the Oddfellows/Santa Rosa Cemetery that Frank was not buried until July 1921, a full three years after his death in France. They surmise that he was buried in a temporary mass grave until they could eventually ship him home. He was the first of the fallen sons of Santa Rosa to be returned. The article in the Press Democrat mentioned city flags would fly at half-mast, businesses would close and full military honors would be presented at his funeral. I hope it brought some comfort to my great grandparents and sisters at the time.

We determined that he was in England on July 12, 1918 and died July 29, 1918 somewhere in France. His gravestone reads “Co K 109, Inf. A.E.F.”  From reading various texts it is most likely that he was part of the Second Battle of the Marne and may have fallen near Chateau-Thierry.

If possible, I will go and pay my respects when I am on my way to Reims. If that proves too difficult, I will light a candle at the Cathedral in Reims.

You can read more about Frank E. Denham and what his loss meant to my family at http://redesigning49.com.