I love reading mysteries and I love reading travel books. This month I moved my household and I seriously pruned the contents of my bookshelves. I also found a couple of books that I forgot I had bought to read. One is Jo Nesbo’s The Bat. It is the first of his Harry Hole mysteries. Interestingly, his books are not mentioned in Nancy Pearl’s Book Lust to Go. But is was mentioned on a page of Oslo tidbits in National Geographic Traveler.

Harry Hole is a police detective in Oslo, but this first murder mystery is set in Sydney, Australia. Besides being an entertaining mystery novel, it is making me want to visit Sydney.

Especially in chapter 24, when Harry and his Swedish girlfriend go to the SEA LIFE Sydney Aquarium at night. I want to have my own experience after reading this excerpt:

“They descended a staircase that wound down to one of the big tanks.

“The tanks aren’t actually aquariums in the true sense of the word, they’ve just enclosed a part of the Sydney Harbour.” Brigitta said as they entered.

From the ceiling a greenish light fell over them in undulating stripes and made Harry feel as if he were standing on a mirrorball. It was only when Birgitta pointed the torch upward that he saw they were surrounded by water on all sides. They were standing in a glass tunnel under the sea, and the light was coming from outside, filtered through the water. A huge shadow glided past them, and he instinctively recoiled. 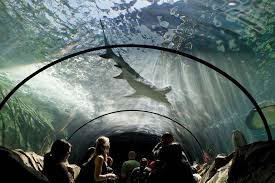 You will have to read for yourself about his encounter with a great white shark.