UK Sarah and I continued our road trip to Pahia and checked into the Pearl of the Bay motel. We spent the first night noshing on a picnic dinner we assembled at the Farmers Market and catching up on our reading and email. The next day we drove straight to Waitangi, which is adjacent to Pahia. 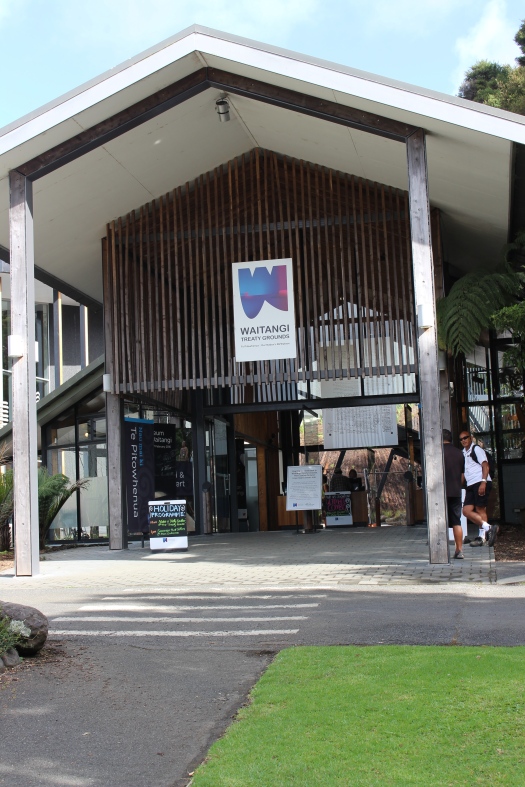 The Waitangi Treaty Grounds charge an admission to non-Kiwis. When we were there in January the new museum was just days from opening. The gift shop was still small, although there is a lovely cafe with outdoor dining between the main entrance and the waka or war canoe.

As the website says: Te Whare Rūnanga (the House of Assembly) is a carved meeting house in traditional form but is a unique expression of its purpose. It stands facing the Treaty House, the two buildings together symbolising the partnership agreed between Māori and the British Crown, on which today’s Aotearoa New Zealand is founded.

We spent a couple of happy hours walking the grounds on the mostly paved trails or elevated boardwalks, reading the exhibits and walking through the Treaty House and carved meeting house. There was a bus of tourists yucking it up at the waka, but we were able to easily walk ahead of them and enjoy the grounds in relative peace.

The Treaty Grounds was readying for the annual ceremony celebrating the historic occasion on Waitangi Day–a national holiday. This particular ceremony is always marked by loud and angry protests from various Maori people. Free speech is alive and well in New Zealand. This year was also going to include the museum dedication.