I set aside one of my days in London to follow the path of Walk 5: Soho to the British Museum from Walking Jane Austen’s London by Louise Allen. I started from Paddington Station, but the Bakerloo line was closed for maintenance so I walked to the next station and got off at Oxford Circus.

Oxford Circus is a busy shopping area with a Top Shop, Marks and Spencer’s, and street performers, people raising money for charity, and tourists. It is hard to imagine Jane Austen might have once walked here. I walked towards Poland Street and glanced down Argyll Street before crossing. I spied the Liberty Stores and took a detour (see earlier post).

I rejoined the walking tour and entered Soho. The book gives a variety of historical facts not all of which are directly related to Austen but from the same time period. Occasionally, there are tidbits like, “The house of Doctor James Stanier Clarke, the Royal Librarian who showed Jane around Carlton House, was on the north side of No. 37. In December 1815 he wrote to her to offer the use of his personal library and to assure her that there was always a maid in attendance. There is no record of Jane’s response to the shocking invitation to visit an unmarried man’s home.” (p61)

I got to the brink of Chinatown and I was beginning to flag. I realized I was also a few blocks from the famous Foyles bookstore. I left off the walking tour and went in search of books, a loo and some hot tea. Little known fact, the creator of the mystery series Foyle’s War named the lead character Christopher Foyle for his favorite bookstore. There a number of outlets but 107 Charing Cross Road is the flagship. I started on the 5th floor at the cafe and then leisurely worked my way through every floor. 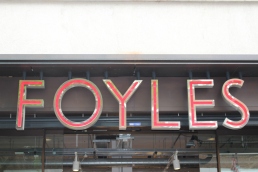 I rejoined the tour and walked to Bedford Square where I discovered not every blue historic marker is so special. On to the British Museum. The British Museum’s collection is first rate. The empire gave them the opportunity to haul a lot of cool loot back to London. I was disappointed that a few things have changed since I my last visit. I do not remember so much junk for sale in the center reception area, plus cafes. The museum is free of charge (although a 5 pound donation is suggested). I was not interested in a sandwich wrapped in plastic so I moved on to find a place for dinner.

The most direct way to get back on the Tube at Tottenham Court Road was also closed so it took a little longer to get back. By this time my ankles and feet were not responding to the signals from my brain so I went back to my room at the Hilton and put my feet up. I had yarn and stationary to sort through from the Liberty stores. 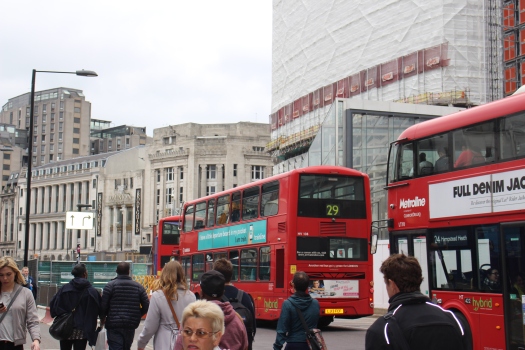 There are 8 walks in all to appreciate Jane Austen and the rich history of London. It also helps to pay attention to the layers of detail all around.