It was so thrilling to be part of history. This was the biggest worldwide march for women ever. It came together within just a few months with marches from Antarctica to Stockholm and all across the United States. My son and I went to the Women’s March on Washington, DC. It was the first really big march for either of us. 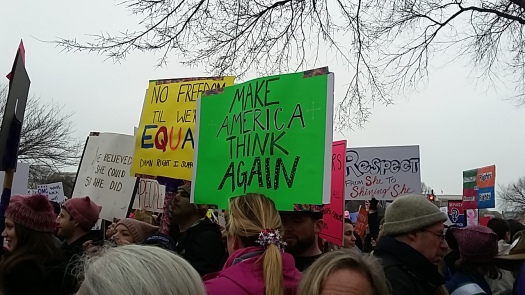 We drove from Boston to DC on Friday. It was a very long day due to traffic and weather. My college chum Carole was hosting us and her nephew Cade (who was my other March buddy). We chatted briefly, made plans for the morning and then went to bed.

With Carole’s local knowledge we were able to get going at 8:30 a.m. and beat the traffic. She went way round to the back of the Capitol and came back in, dropping us a few blocks behind the Supreme Court building. People were already streaming from everywhere–with pussyhats. So many pink hats!

We joined the throngs and walked toward the Capitol. Cade has worked for an Illinois Senator one year, so he knew his way around. Really though, you just had to follow the masses. Like everyone else we collected signs, button, and stickers, and took pictures of so many clever signs.

We walked past the inauguration infrastructure as it was being broken down. We kept expecting to have to go past some sort of security check. None. We never saw any police presence the entire day. They made no arrests at any of the dozens of Marches. The mood was good natured and even joyful at times.

The main stage was on Independence and because of the 500,000 participants we couldn’t get any closer than the Mall. Since none of us could hear the official program, people got creative and started their own chants. The most common was “This is what democracy looks like.” After 4 hours of crowd jostling I was hoping that Democracy might have a little more elbow room. 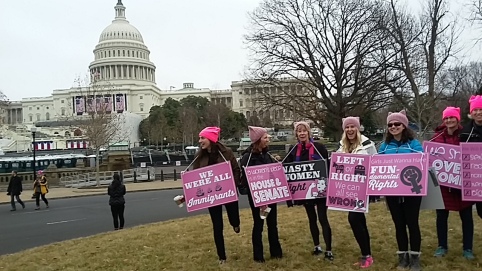 We began to make our way across the Mall and up 4th Street. This took another hour. More and more marchers were arriving to replace the small stream that were heading to the sides. So many marchers filled the area that it shut streets down for blocks. There was a festival atmosphere everywhere we went.

We noticed that some of the more expensive restaurants were closed for private inauguration parties, but we saw very few Trump supporters or school groups. We were getting peckish and Cade had been telling Tevis about District Taco, so I knew we’d end up there for lunch. It is delicious. My only suggestion is to add more seating!

The Metro became more and more crowded as the day wore on. We hopped on the red line to go to our friend Gary’s house and watch the speakers and music on CSPAN. We caught the end and then marveled at the many other marches around the USA–especially San Francisco. Beautiful.

The day held such a positive spirit. I still cannot get enough Facebook shares from family and friends who attended marches in Oakland, Sacramento (my grandson!), San Francisco, San Diego, Boston and my friend Mexicali Cindy who helped organize the very first March of the day in Auckland, New Zealand. Right on!

This is just the beginning of the Resisterhood!