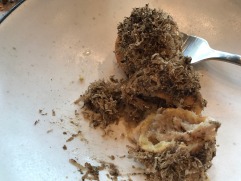 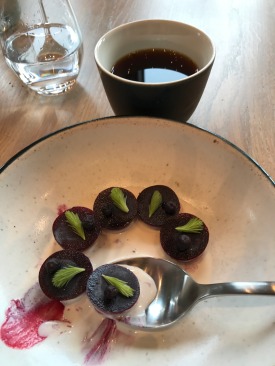 Thanks to Bike Mike, I had two great places to eat dinner and two nights available. The “Paper Island” is a warehouse filled with lots of street food. (A lot like the Portland street food but with a roof and lots of picnic tables.) And the other recommendation was for 108, a bistro started by noma alumni Kristian Baumann. The front desk staff at Absalom Hotel called 108. A table for one was available at 5 or 9 on either open evening. The restaurant also said they only take reservations for half their tables so I could try walking in at another time.

Noma shut in December 2016 so the team could reimagine the restaurant and menu in a new location. Meanwhile, 108 continued to serve up great food at a fraction of the price in a lively atmosphere at Strandgade 108. I am not a foodie, so I was a little nervous. It was the best food adventure I have experienced.

The wait staff worked as a team so I was never left long without something new to try and they all spoke English and were very interested in how I received each dish. They recommended I order three small savory dishes and one sweet. Then I also ordered a glass of bubbly and a cup of coffee with dessert. The couple next to me ordered two savory small plates plus a large plate to share (the monk fish), then after I gave them a bite of one of my dishes, they ordered it too. They also each ordered a different dessert to share. We were all enjoying the atmosphere and the tastes, each more incredible than the last.

I cannot do justice to the various dishes, except to say that I didn’t know that fresh, fresh peas and fresh, fresh caviar with rapeseed blossoms could taste so amazing. And that after eating the shaved truffles on the dumplings of braised pork, I thought I could smell truffle for the next 24 hours. All of this super adventurous eating and drinking for about $75 US.

At the opposite end of the cost curve was the street food, just down the way along the waterfront to a warehouse called “Paper Island” in English. I circled the various vendors twice and decided on the toasted sandwiches at Spoon. I asked the young man making my sandwich where he would recommend for fries. He said the best were at the place across the hall–the only place that fries them in duck fat. They were both delicious. I also bought a local beer at the “bar” in the middle that allows you to stay and dine at the tables while you go back and forth fetching more food. I also got a recommendation for a cheesecake place, Bertels, on the way home. My intention was to walk home and stop along the way, but the rain was lashing and I hailed a cab once I crossed the pedestrian bridge.

Mike’s recommendations were both super. So you may also want to try one of the traditional Danish restaurants known for smorresbord, but only if open-faced pickled herring sandwiches chased with a shot of schnapps (snaps) sounds divine. It sounds like a fast track to a nap to me!

Mike’s other recommendation was to rent a bike and cycle to both Paper Island or 108. This is a very good idea because it is a long way to walk and the taxi ride is about $30 from the central station. Remember rush hour starts early in Copenhagen as most people begin their commute home between 4 and 5 p.m.