Tuskegee is famous for many things including the African American airmen who were trained as pilots and served in WWII. Tuskegee is about a 40-minute drive east of Montgomery and worth the effort. Our first stop was the Tuskegee University campus. We were trying to find the Tuskegee Institute National Historic Site and Google Maps was not able to provide directions beyond the University entrance. Twice we slowed to ask a college student for directions and twice she turned out to be a freshman from California and unable to help us. We finally parked by the chapel and started our own Tuskegee education at the monument honoring the Institute’s founder, a fierce statue of Booker T. Washington helping a former slave out of ignorance. 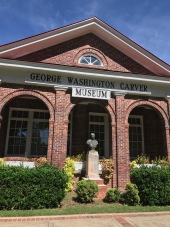 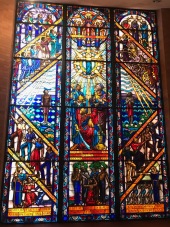 Many of the venues have similar names and it can be confusing. We were able to visit the Carver Museum, a short walk away from the Booker T. Washington monument. The Carver Museum’s exhibits, operated by the National Park Service, are a bit fusty. It is still worth watching the film about Carver’s brilliant science career. George W. Carver sought an education at great sacrifice and ultimately trained as a scientist specializing in developing agricultural crops. He published his research in easily understandable bulletins (a precursor to the USDA bulletins). We enjoy hundreds of foods and products because of his work, including popularizing the sweet potato. I dare you to be less than bowled over by his creativity, productivity and selflessness.

Afterward we drove to the outskirts of town to Moton Field where the Tuskegee Airmen trained. It is a beautiful airfield and still operates for private planes. The National Park Service has a few markers to help orientate you and to tell about the Tuskegee airmen. While we were there a group of US Airforce service people were wrapping up their visit. I was glad that we already knew that their brave and capable service helped to pave the way for desegregation of the armed forces. I was struck by how small the airfield was compared to the decommissioned Airforce bases in Sacramento (McClellan and Mather). Small but mighty.

Life Lesson You Don’t Have to Learn the Hard Way

I used the Alabama Civil Rights Trail brochure as my guide and did not go to the National Park’s website until after we returned home. And even then it wasn’t until I dug deeper that I discovered that we missed the Hangar #1 & Hangar #2 museums at Moton Field. They are currently open Monday- Saturday 9:00 a.m. – 4:30 p.m. CST, except Thanksgiving, Christmas, New Year’s Day and Sundays.