The countdown is underway. March 29 is the drop-dead date. If the British Parliament does not approve Prime Minister Theresa May’s deal then the UK will leave the European Union without an agreement and this is likely to result in chaos in trade and travel. Most of the people I talked to shared that they feel that the uncertainty is already costing their economy and that they expect more of a bill to come due (and that the average person will pay it–not the politicians or the wealthy). I arrived in London on March 12th and watched the Parliamentary debate as covered on the BBC on my hotel room television.

The motion to pass the Conservative Prime Minister May’s negotiated principles for political divorce went down in flames–another historic losing vote. No one seems able to explain why Theresa May hasn’t lost her job yet. 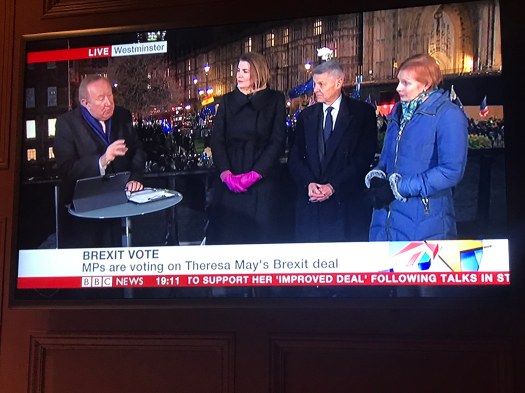 Later in the week, I anxiously listened to the March 18th podcast Talking Politics. “Can this go on?” was the title and Cambridge professors David Runciman and Helen Thompson are bewildered. They made references to the English Civil War and joked at the end that all that is left is the Queen intervening.

A day or two later I discovered the FiveThirtyEight political podcast from March 15 focused on Brexit. Galen Druke interviewed David Runciman and Helen Thompson. It was helpful to have Druke’s questions to unpack some of the nuances. At that time Runciman gave May a 50-50 chance of getting her deal passed. At that time they thought the next steps would be for the Prime Minister to bring a clear choice in two votes to the Parliament on March 19. Things continue to evolve including the EU ministers expressing that the only way the UK can have an extension for an orderly exit is if the Parliament approves the negotiated deal. You can get up to the minute information on the BBC website.

You might wonder why an American should care so much about Brexit. Partly because I have friends in the UK who will be impacted. And because the United States is inexplicably still connected to Britain. In 2016 the UK voted for Brexit and the US electoral college gave Trump the nod. It feels like much of a muchness. We are both struggling with how we maintain a functioning democracy in the social media age and with growing economic inequality and insecurity due to climate change.

I’m praying for us all. May cooler heads prevail and may people dig deep for the kind of leadership needed at this pivotal moment in history.