Many a fourth grader in the Sacramento area has taken a field trip to Sutter’s Fort. It is easy to see it as a place primarily for kids. Alas, that would be selling Sutter’s Fort short. 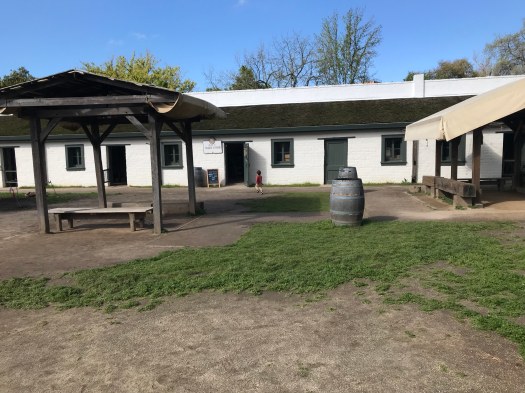 It doesn’t take much imagination to put yourself into the place of a miller or blacksmith living on this farm enterprise. Or imagine what life must have been like living in a community confined to these relatively small courtyards during floods in winter. This is where many a pioneer stopped thankful to reach “civilization” as primitive as it was. The California Indian museum next door tells the story of the indigenous people who lived here before European settlers and their fate as the settlers introduced small pox and other diseases and land ownership.

Here you see how the fort was first and foremost an enterprise. Many of the recreated scenes are accompanied by a narrated recording, but there are a few volunteer re-enactors who enliven the feel of the clerk’s office or other activity centers within the fort.

John Sutter was a Swiss immigrant who was granted the land from the Spanish for the fort and farms around it. His place in history was secured as the owner of the mill further upstream of the American River in Coloma where gold was discovered. The resulting rush brought a population of seekers and adventurers, quick statehood, and huge environmental degradation and water laws.

Entrance per adult is $5 and per child over 5 is $3 except on special interpretive days like the Friday we visited. Then the admission is $7 per adult and $5 per child over 5. (Toddlers are free!) The fort gates are open almost every day of the year from 10:00 a.m. to 5:00 p.m.