I made the trek to the Isle of Wight to celebrate UK Sarah’s birthday. She and her husband Roy sailed to the Royal Yacht Squadron, where they are members, and docked at “the haven” marina.

The birthday party was in the pavilion with the Squadron’s super catering and service. A local band provided music for a boisterous ceili. It was a fabulous evening.

I had the privilege of staying at the “castle” for two nights. It was the MOST comfortable stay I’ve enjoyed away from home. The Royal Yacht Squadron is elegant and comfortable but nonmembers cannot stay except as guests of a member.

This 200 year old gentleman’s sailing club allows women members now, and it is still very exclusive. I’m respecting the privacy of members and only sharing outside photos.

My special skill at getting seasick in a bathtub will keep me from becoming a sailing enthusiast; however, I am grateful to Peter Bibby for knowing so much history, America’s Cup and other racing history and sharing it with me. 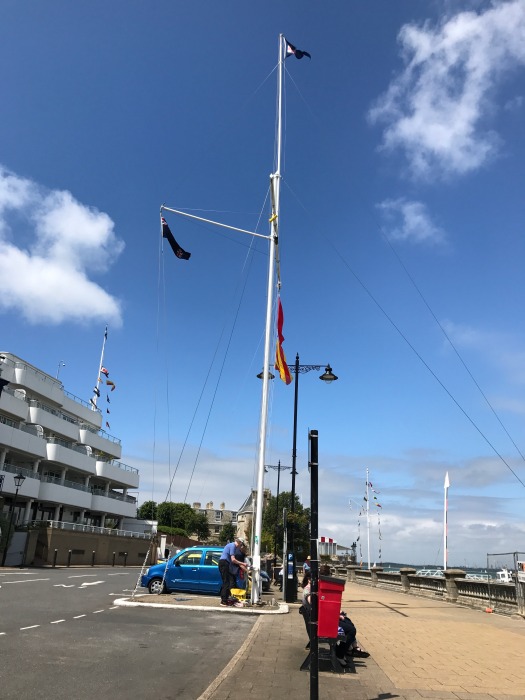 The people-only ferry from Southampton to Cowes on the Isle of Wight is just 25 minutes. Long enough for the woman next to me to fall asleep and snore softly and for me to start feeling queasy and then we arrived. You can catch a ferry from Portsmouth, Southampton, and Yarmouth.

Cowes is a quaint village. There are other villages on the island and room for a music festival, but I stayed on the few blocks that hug the coastline and had a delightful time.

I can see why Britons outside London might be feeling some discontent. In Cowes the post office was closed and the only place to ship packages was from a grocery store up the hill. There are no bank storefronts–only mobile vans–and one ATM (or “hole in the wall”), so there is always a line. And the floating bridge connecting East Cowes and Cowes was not working while I was there on the weekend of the music festival.

Still Cowes is flat out charming and worth the effort, especially if you love sailing.

Getting to Cowes takes some effort. In my case, starting from Copenhagen involved a train, a plane, a bus, a train and a ferry. The Britain Rail website was completely misleading but fortunately the Heathrow Express agents were super helpful. Bottom line, the only train leaving Heathrow is the Heathrow Express. Everything else is connectable by bus. I rode the bus from Heathrow to Woking, then the train to Southampton. There is bus that will take you to the ferry terminal for 2 pounds or free if you have a Red Funnel Ferry ticket. The craziest part of my journey was learning my 5 pound note saved from May 2016 was no longer accepted. They changed the bills last year and the old ones are no longer accepted. This year they are changing the pound coins. Spend them now!

One of the joys of travel is squeezing in quick shopping expeditions to a wool shop for new knitting projects or a great book store. I had identified Mrs. Hedgehog’s Knit Bits in Cowes on the Isle of Wight before I left so I didn’t look for wool in Denmark. I also packed a few patterns that I plan to knit (after my disastrous assumption that I could translate Norwegian patterns when I got home).

It turns out that Google thought the shop was one place, and it was not. So I found my way there by asking other merchants on High Street until I found it on the corner of York Street and Mill High Road. It was the Big Woolly  Weekend and I was hoping to find a public knitting event to join. There wasn’t anything planned for Cowes so I focused on looking for yarn for a baby sweater. 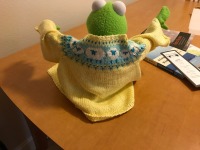 Mrs. Hedgehog offers only acrylic yarn but in a great range of colors. The shop also offers everything you’d need for tools and some kits and patterns. I found a range of colors I loved and I might still have held out for washable wool, but the women in the shop were so friendly and helpful, I made a purchase.

I just finished the sweater inspired by a sweater Princess Charlotte sported in a photo in People magazine. I used Purl Soho’s “Little Girl Fair Isle Sweater” for the sizing (12 month) and adjusted for higher weight yarn. I adapted the sheep graph from Donna Smith’s “Baa-ble Hat.” I gave it to Amy’s expected baby girl.