We may honor the life of Congressman John Lewis in a multitude of ways. First and foremost, we shall register to vote and then vote (early, by mail, or in person). There are many other ways as well. I learned about John Lewis when I was in Selma and Birmingham on my Civil Rights Crawl. I have since leaned in to learn more. Now there is new material that is worth taking the time to enjoy–and seldom has a man been more full of joy than John Lewis.

Do you have 15 minutes? Read his call to action that was written towards the end of his life and published posthumously in the New York Times.

Do you have 2.5 hours? Buy a $12 ticket at Crooked.com (Crooked Media/Pod Save America) for a special viewing of the movie John Lewis: Good Trouble with a on-line discussion panel afterward on Thursday August 7, 2020 at 4 p.m. PST/7 p.m. EST.  The ticket unlocks the film to view for 72 hours. Five dollars from each ticket will go to PowerPac to support their work.

Do you have 4 hours? Admit it, in this time of COVID you probably do. Then I strongly encourage you to watch John Lewis’ funeral at the Ebenezer Baptist Church in Atlanta, Georgia. I’ve linked to the PBS full coverage on YouTube.com that is without commentary. I found the funeral service uplifting. It was as if I came out of Wonderland and things were right side up again. A good man was called out for being good. A hero was honored for true unselfish heroism. Of course you can get a Readers Digest condensed version by watching just President Obama’s eulogy.

Then go for a walk and ask yourself “What can I do for my democracy?”

Selma is essential for any civil rights crawl. 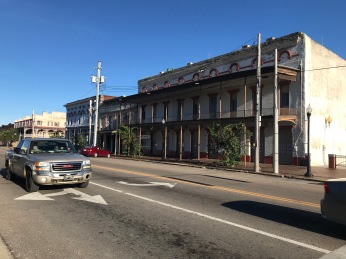 Everything in Alabama is close-by. This is the beauty of planning a civil rights crawl. You can cram your day chock full of learning and eating with barely any time wasted in the car. It also means that you may try to do too much in one day. We found ourselves in this predicament as we drove from Montgomery to Tuskegee then back towards Selma then on to Marion with stops along the way. We did not have time to carefully follow the Selma-to-Montgomery National Historical Trail. We also arrived in Selma after the National Voting Rights Museum closed.

We were able to walk across the Edmund Pettus Bridge and imagine what it must have been like to reach the peak of the bridge, high above the Alabama River, and face a sea of mounted police and police cars with blue lights flashing. I was energized by a group of high school students who started their walk with us but quickly outstripped us. We’d see them again at Brown Chapel. We also spoke with some fellow travelers—a group of friends from Texas and New York–who met up in Alabama. They recommended we also see the Old Live Oak Cemetery. 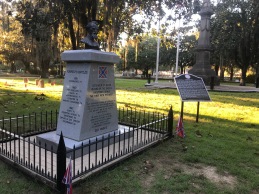 We took their advice and drove to the cemetery. It is spooky with ancient Live Oak trees dripping with Spanish moss. We all thought of Savannah, Georgia and the cemetery in Midnight in the Garden of Good and Evil movie. The Selma cemetery is well cared for and interesting. Thanks to our friends we knew to walk deeper through the plots to an area dedicated to the remembering the Confederacy. There were confederate flags on many of the graves, memorials to Jefferson Davis and General Nathan Bedford Forrest. The area is maintained by the United Daughters of the Confederacy, Selma Chapter 53. It is also unsettling and helped us understand why Selma as a city has not been able to move on since the 1960s. It looks like it has been in a long state of decay since the Selma-to-Montgomery March. This is a community that has not made peace with its past.

The contrast of the large lawns and stately homes near the cemetery with the George Washington Carver apartment complex across the Brown Chapel AME Church is stark. We pulled up to the church as the high school students were leaving and Chantay spotted the church pastor. She spoke to him and enjoyed a tour of the sanctuary while Phyllis and I admired the Martin Luther King, Jr. monument. The pastor was very generous with his time and gave Chantay commemorative key chains to share with us.

We drove about 40 minutes through beautiful countryside to Marion, Alabama. The March really starts here. Jimmie Lee Jackson was shot by a state trooper during a peaceful protest for voter rights on February 18, 1965. This prompted a peaceful march from Selma to Montgomery on March 7, 1965. Reverend Hosea Williams and John Lewis stepped from the pulpit of Brown Chapel Church and led 600 marchers six blocks to the Edmund Pettus Bridge where the Sheriff and mounted deputies met them with nightsticks and tear gas. Known as “Bloody Sunday” it sparked the expanded civil rights movement in Alabama. Rev. Martin Luther King Jr. came from Atlanta and helped to plan the Minister’s March and then the Selma-to-Montgomery March.

Alabama looked different than I expected. I’ve been to all of the other Southern states save Kentucky, and I thought Alabama would be flatter and dominated by farm crops. Blame digital map apps. If you are looking up where you are going on a paper map you can’t help but see that the Talladega National Forest is like a green smoothie spilled across the state. With Google Maps I zoom in on where I am going and if I don’t take the time to zoom out or use the other features, I make a mental map that is mostly flat.

I also expected more water. A small part of Alabama touches the gulf shore at Mobile, but for the most part Alabama receives its water from the sky. Far from the Mississippi River, the state and its largest communities are not dominated by rivers in the way so many other places are in the US.

There are more hills than I expected and the forests are the same mix of pine and hardwood that cover the Appalachians. We came for the civil rights history but these woods made me wonder about the indigenous people who were here even earlier. The Cherokees, Choctaws, Creeks, and Chickasaws, as well as the Alabama-Coushattas and the Yuchis hunted, danced and walked in these woods.

Our adventure is a civil rights crawl. Our plan is to drive our rental car to Montgomery-Tuskegee-Selma-Marion-Greensboro and Birmingham. Phyllis, Chantay and I have done internet research and we are also using the “Alabama Civil Rights Museum Trail” as a guide. We also look forward to eating good food and meeting friendly folks from ‘Bama all along the way.