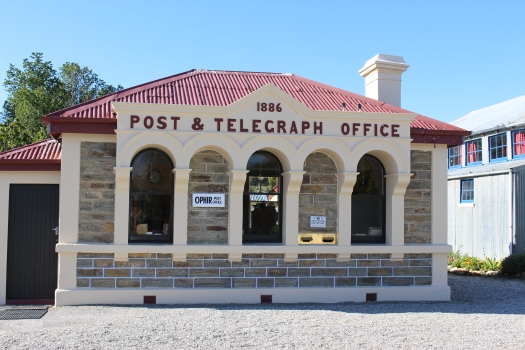 Before I started my second day of cycling on the Otago Central Rail Trail in New Zealand, Nick and I stopped in Ophir. Ancient Ophir was one of Solomon’s ports where rich minerals entered the kingdom. Not surprising then there are towns named Ophir in many goldfields. This small village in Central Otago is rich with historic buildings. This post office is part museum, part post office, part souvenir shop. Buy a postcard and post it from here.

I grew up in Sacramento which is at the heart of the gold story in California. I also spent a lot of time as a teenager in Nevada while crewing for endurance horse riders. I had a memory of Ophir Prison Band but could not remember what it was all about until I asked Google and rediscovered the crazy kazoo band.

There are terrific restored restaurants and accommodation in Ophir. Many of the businesses in Central Otago are for sale, so f you fall in love with the place and lifestyle, make an offer.