Driving through Alabama, I came to a renewed appreciation of small towns. So many of the town squares and courthouses reminded me of some of my favorite Iowa small towns. People who live in small towns are often underestimated or overlooked. The history of the civil rights movement has deep roots in rural places.

The March from Selma to Montgomery has its roots in Marion, Alabama. Jimmie Lee Jackson was shot in Marion by a state trooper during a peaceful protest for voter rights on February 18, 1965. This prompted the first attempt at a peaceful march from Selma to Montgomery on March 7, 1965. Reverend Hosea Williams and John Lewis stepped from the pulpit of Brown Chapel Church and led 600 marchers six blocks to the Edmund Pettus Bridge where the Sheriff and mounted deputies met them with nightsticks and tear gas. Known as “Bloody Sunday” it sparked the expanded civil rights movement in Alabama.

We drove to Marion, Alabama on beautiful country roads. Marion, the college city, is only 28 miles away and is the county seat for Perry County. As a Californian, it is odd to have so many small counties, each with their own courthouse on a square, although it is charming architecturally. We were visiting my friend Dr. John Dorsey in Greensboro, Alabama. We needed an accessible accommodation, so we reserved rooms at the Sleep Inn in Marion. Greensboro is so small the only sleep options are bed and breakfasts and AirBnB.

Marion is also the home of the Marion Military Institute and Judson College, so it is nicknamed, “College City.” The Marion Military Institute has been preparing young men for college and military service for over 165 years. Judson College was originally a “ladies college” or finishing school and has evolved into a liberal arts college. The town of Marion is a classic southern county seat with a courthouse in the middle of a gracious town square. Marion can also claim Coretta Scott King as one of their own. 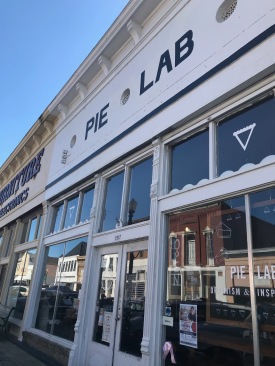 It was a home game for Alabama so Greensboro had many people driving through from Mobile and stopping at the Pie Lab. My friend Dr. John Dorsey arrived in Greensboro 13 years ago and the downtown was almost empty. He came to serve as a psychiatrist in a rural community and try some ideas about affordable homes with supportive services in a lower cost area. Project Horseshoe Farm has grown and the 15 fellows that are living and working in the community, along with the Rural Studio students created an economic spark and now there is a gym, The Stable coffeehouse, Pie Lab, several retail shops, and more.

Hale County, just 10 miles down the road from Greensboro, is the home of Auburn University’s School of Architecture Rural Studio. The students are required to design, fundraise, and build their final project. Many of their projects are in Hale County or in Greensboro. It is world-renowned and a terrific resource in the Black Belt of Alabama.