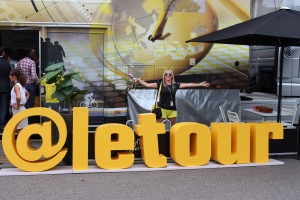 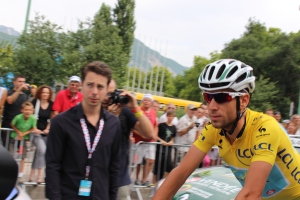 Having VIP access at a depart is just the best. Thomson Tours delivered us to the Village where we ate a few snacks waiting for the team buses to arrive. The access to riders is phenomenal. We watched as the bikes were unloaded. Soon the cyclists rode past to sign in and then they would return to the bus until the start. There were lots of opportunities to learn more about the teams and gather a few signatures. 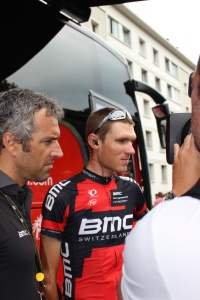 I decided to focus on team BMC and I overheard someone from NBC Sports arrange to interview Tejay Van Garderen at about 11:20. So I cruised around taking lots of pictures and then returned to the BMC bus in plenty of time.

I chatted with Ian the professional mechanic for BMC. He started his career as a mechanic in a bike shop in Alaska. He worked his way up to the prized full-time mechanic positions on the European bike tour. Although he will head to Utah and Colorado next with the team, he is based in Belgium. He said there is not real off season. It is a peripatetic life and not for a weak constitution.

Ian suggested I stand near Tejay’s bike (No. 141) so I would have a better chance to ask for an autograph on my California flag. I repositioned and had a chance to speak with an NBC Sports cameraman. His life is a lot of hurry up and wait. He is pleasantly surprised how competitive the Tour is this year. He suggested I ask for Peter Stetina’s autograph. Peter is very obliging and complimented my Cali flag and even though his bio says he’s from Boulder, CO he said he is from Santa Rosa, CA.

Soon Tejay emerged from the team bus and gave his interview. Then he was rushed by another group of journalists and they had to share an interview with him. His handler then cut it off. Tejay graciously signed my flag and then kicked off to sign in at the main departure stage. 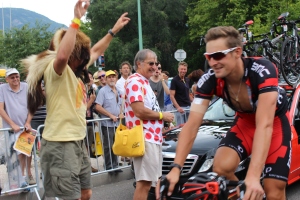 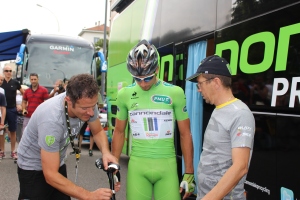 I moved up to the Cannondale bus because I really hoped for Peter Sagan, the green jersey’s signature. His nickname this year is the Wolverine and he has a cool wolverine on his bike (and look closely at the top of the helmet). He was the last member of the team to emerge from the bus and he fiddled with his bike for quite a few minutes and then just as he was kicking off he stopped at my unfurled flag and signed!

I went to the line to watch the riders migrate to the start line. Vincenzo Nibali, the yellow jersey, rode directly in front of me! This is one of the many reasons cycling is such a fun sport to follow.

James in our group is living with a serious illness and continues to challenge himself. He came on this tour to be able to run a HC category climb. We dropped him at the bottom of the Col yesterday and he ran to the finish line. He had a wonderful interaction with Greg and Kathy LeMond just past the finish.

James also brought his real wolverine hat and so we have been calling him Wolverine. At home in Minnesota he wears it when he encourages marathoners from the sidelines. He has danced and shouted encouragement on the Col and then today to the racers as they headed to the finish. It was fun watching their reactions. Most smiled and laughed. James is irrepressible and a delight.

It is our last full day as a Thomson Spectator VIP group. Tonight we will celebrate the Thomson cyclists who are still on the road as I write. We have a bag full of sponsor swag to share and some funny awards and songs.

At the end of the stage, Nibali is still in yellow. Teejay moved up to 5th overall.

One Reply to “Stage 14: Depart at Grenoble”