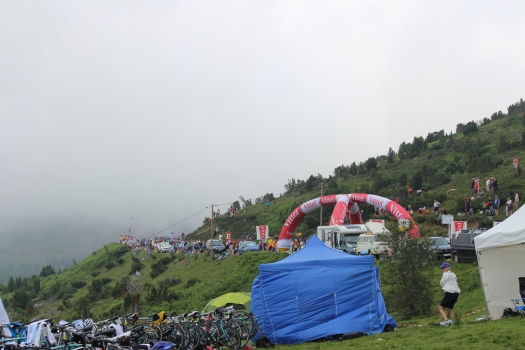 As mountaintop experiences go, this was one of the best. About 80 Thomson guests and staff met by bike or van about 1.2 km from the finish on the epic Hautacam. The road is barely wide enough for tarmac and barriers so we hiked up the hill to the finish. We saw Bob Roll again and then I hung out for a couple of minutes and met Christian Vande Velde who is enjoying his first year as an NBC commentator. I asked him if the pace is different than cycling. The days are longer as a broadcaster. And he cannot just ride his bike off the mountain at the end like the racers do. The traffic can be tremendous getting down at the end of a race. Oh yes, Christian signed my flag.

I enjoyed looking at how they set up the finish since there is really nothing but road and mist at the top of Hautacam. Then I took my time scrambling down the side of the road to the Thomson Bike Tours compound of tents. Again they sent people 4 days ahead to reserve and protect our spot. In addition to the televisions broadcasting the race in English, there was a live band. The lovely Gigi and her band got us dancing and added to the party atmosphere.

The Tour put barriers along the road for the last 3 kilometers. This takes the “piss out of the spectators.” Fine with me. It makes me nervous when spectators run alongside or touch the cyclists. The Tour de France issues all sorts of warnings and there are gendarmes all along the route trying to keep fans in order, yet people will still crazy, especially when alcohol is involved.

The caravan went by and only a few of us went to catch swag. The Thomson cyclists had ridden their bikes up Hautacam after a few big days of riding and many of them were checking their eyelids for leaks.

The the race came roaring up the hill. We had already watched Nibali attack at the bottom of the climb. He is silencing (I hope) the critics who question if he would be wearing the yellow jersey if Froome and Contador were still in the race. As Sandy from Melbourne says, “Your Aunt would be your Uncle is she had balls.” Give the shark a break, he won the yellow jersey on Stage 2 and his team has kept him safe from crashes and attacks. He is the yellow jersey and nothing but catastrophe or a positive test will keep him from the top of the podium.

As riders went by I found myself possessed with the spirit of Wolverine and I shouted. “You are awesome. Go, go, go!” The other fun part of a uphill finish is the racers are spread out. On the rail I met George from South Africa. There are VIPs and then there are VIPs. He is a Europecar muckety-muck and he has ridden in the team car following the racers for 2 days. I found it hard to believe him when he said he enjoyed cycling up the hill and watching with us from the side of the road more than the team car.

The hardest part of the day was getting off the mountain. We were sun soaked and tired and the traffic was miserable. Our van driver Collum did a phenomenal job navigating the pedestrians, cyclists and bad drivers. We did not get back to the hotel until 10 p.m. A couple of non-Thomson cyclists crashed including one teenager who thought he was invincible until he was not. (He will be okay after having some bones set.)

After a quick bowl of pasta I crashed.  This morning we go to our last VIP departure.  Only 3 stages left.