It was a very emotional day: the final stage of the Tour de France. After 21 stages in 23 days I can hardly believe it is actually over. It was also an exhausting and hot day. It took some staying and recovering to appreciate that I was actually on the Champs Elysees watching the last eight laps of the 2014 Tour de France.

My favorite moments were actually trying to snap a picture of the lantern rouge, the only Chinese rider Jl Cheng of Giant Shimano.  At the start of the day he was almost 6 hours behind Vincenzo Nibali. Today he was lapped by the main peloton. Ouch.

We were about 150 feet from the finish line, but it was on the other side of the road so it was only on a distant large screen television that I could see Marcel Kittel just barely beat Andre Greipel.

The end of the race was a nice surprise. Much of the crowd stayed and cheered for the riders as they made their way to the team buses. Some even high-fived us as we reached over the barrier. The winner of Stage 19 stopped to speak to his friend. Families helped to celebrate the end.

Thomson Bike Tours went on a river cruise. I chose to walk slowly back and see the team buses and savor the last moments of this magnificent event. The Vittel water sponsors were peeling off the logo from the vehicle and I got a section of it. Sounds strange I know, but it looks really cool. 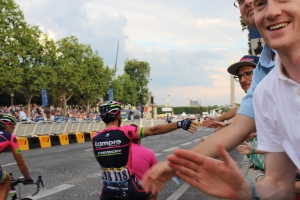 I paused to see Jens Voigt, Frank Schleck and others at the Trek Racing Team bus. Then I spied Gabe, my Trek Travel guide. It was great to give him a big hug and bring my experience full circle.

Now I cannot wait to get the DVD from NBC Sports so I can hear about this year’s tour in English!

One Reply to “Tour de France Finale in Paris”